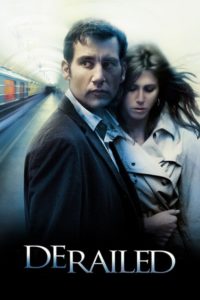 He never saw it coming.

When two married business executives having an affair are blackmailed by a violent criminal, they are forced to turn the tables on him to save their families.

Clive Owen and Jennifer Aniston are two adulterer-wannabes who are "Derailed" from their plans in this 2005 film. It also stars Vincent Cassel, RZA, Tom Conti and Melissa George. Charles Schine (Owen) and Lucinda Harris (Aniston) meet on a commuter train; on the night they take a hotel room to begin their affair, it's broken into by a criminal, LaRoche, who steals from both of them, rapes Lucinda repeatedly, and then continues to blackmail Charles for large sums of money. Lucinda refuses to go to the police, saying that her husband will file for divorce and take her daughter away from her.