When Sharpe is ordered to whip the King of Spain's Irish Royal Brigade into shape, he faces dissent from the men who believe the British are slaughtering their relatives in Ireland and a spy from within. 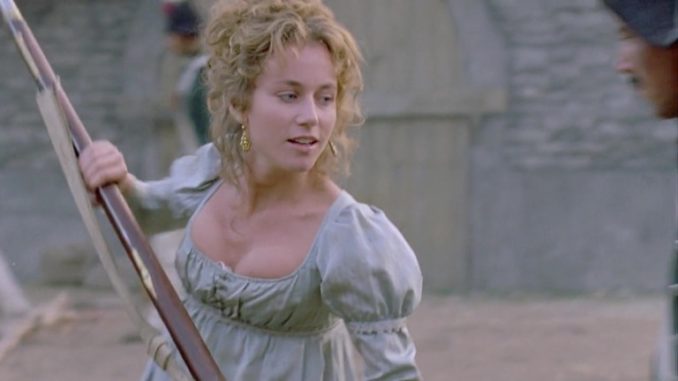 Major Sharpe is tasked to become a tactical adviser to the Real Compania Irlandesa under Lord Kiely. He is to make real soldiers out of the company's men. Lord Kiely brings his wife Lucy along with him. But they are not in good terms because Lucy had a miscarriage. In one instance, we see Lord Kiely refuse Lucy's sexual advance.

Lord Kiely starts an affair with Dona Juanita, a Spanish local who is helping them. One night, he goes inside her tent to fuck her. Lucy, knowing this, goes inside Sharpe's tent at the same time and begs him to put a stop to Lord Kiely's affair. She offers herself and tells him that he can fuck her if he can do that. She unbuttons her blouse and opens it, revealing her chest (and maybe breasts, but we don't get to see it) to Sharpe. "Treat me like the lowest Marseille whore and I will not complain," she tells him. Unfortunately, Sharpe pulls up her blouse and does not take her offer, telling her that it's not because she's too plain for him, but because she is another man's wife.

Dona Juanita, meanwhile, we learn is not only a spy of General Loup, the enemy, but his lover as well (we see them kiss). So is fucking Lord Kiely a part of her spy plan? Does Loup know? In my view, I think her affair with Lord Kiely has nothing to do with her mission and it's just a perk of her job that she took advantage of.

In an earlier scene, Lucy faints and Sharpe is tasked by the caretaker to loosen her clothes and let her breathe while she leaves the room to get something. Sharpe starts to untie Lucy's blouse, but she wakes up in the middle of it, asks him why he is undressing her, and starts tying up her blouse back. A wasted chance for a "taking advantage of someone's wife" scene, but I guess this is where Lucy starts feeling attracted to Sharpe.

In a later scene, General loup captures Lucy and tries to rape her, but she resists and tries to kill herself, so he stops.