Engineer Francesco Ferrero is sent to Emerald Island to survey a silver mine. He is a replacement for a previous engineer named Maestrelli who mysteriously disappeared. Chaval, a strange man offers him shelter on the island. Engr. Francesco starts surveying the land but is distracted by local women, particularly Janine (Laura Gemser), who have the habit of swimming nude on the beach. Accidents which destroy his tools start to happen. This leads Francesco to think that someone might be sabotaging the operations of his company and that someone might have been responsible for Maestrelli’s disappearance. He is also starting to fall for Janine, but the problem is she is already engaged. The island might seem to exude happiness, but a dark presence looms.

At the port, Engr. Francesco Ferrero immediately notices the beauty of Janine (the pretty Laura Gemser). He smiles at her and she returns it with her own cute smile. His guide warns him that she is already engaged, but it seems to be just a light-hearted warning.

Francesco waves at Janine from the house that he’ll be staying in. Janine waves back. When they are at the plantation, Janine always has a warm smile for him. She really has a high level of interest towards the new white guy.

Janine, along with the other native girls, swims naked on the beach. They call Francesco to join them. He approaches them but says he has to work first. The naked women, along with Janine, pull him towards the water. He has no choice but to swim and frolic in the middle of these sexy black women.

Janine gets out of the water and runs inland into her hut. Francesco follows him. Janine kneels and prays at an altar with the words “Help me to make this gift a sweet one.” Then he lays with Francesco and makes love to him.

She asks him if “he wants to make sugar with her.” That is the term they use for love-making. He says yes and asks her back if she does too. She tells him yes, ever since they met the first time. So that’s why she’s all smiles at him at the port because she really wanted that white cock from the first time she saw him, even if she is already engaged to someone.

Janine’s friends who were with her at the beach follow them and peek thru the window of the hut. They confirm their suspicion that Janine bedded the white guy. They tease her and tell her if they can make sugar with Francesco too. Janine says sure, come in. But Francesco says he can’t take them all.

On another day, Janine brings Francesco to a forest and makes love to him there.

Janine roams around the village with Francesco while holding hands with him. From a hut, Janine’s fiance, Pierre, calls her attention and waves a stuffed fish. That means he wants to have sex with her. Janine tells her not now. Pierre doesn’t seem to mind that Janine and the white guy is holding hands like lovers. White guy privilege, I guess.

Janine comes to the place where Francesco is staying. She lays down on his work table. He kisses her and they make love on the table.

One day, Lamberto, one of the native villagers catch a turtle and jokingly says he wants to marry it. When Janine tries to pet it, it snaps and tries to bite her. Lamberto says of course, because all women bite when Janine gets close to their husbands, suggesting that Janine is really kind of the village slut.

In the church, the priest asks Janine’s mom where Janine is. She answers she is with Francesco. Pierre laughs from behind so the priest asks why he is happy when his girlfriend is with another man. Pierre replies he is not happy for himself, but he’s happy because Janine is happy. Janine’s mom adds that unlike her sister, Janine will come back for her wedding, meaning she thinks Janine is not really serious about Francesco.

One day. Francesco goes to Janine’s hut and sees her laying with her fiancee Pierre. It seems her fascination with his white meat is waning. He goes away.

At the church, Francesco talks to Janine with Pierre by her side. Francesco tells her that he’s there to say his farewell because he’s leaving. Then he asks her if she would feel sorry about it. Janine says, of course, she’ll be sorry, because she’s always sorry when a friend leaves. Ouch, it seems that his white guy privilege is really spent at this point. Pierre laughs and adds that Janine might be sorry, but he himself is definitely happy. Then he whisks Janine away from the white meat.

Later, though, Francesco saves Janine from a voodoo practicing guy. So she comes with him and they leave the island using a canoe into a more secluded one. 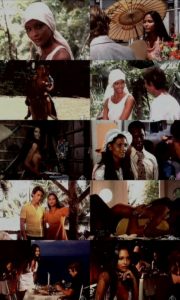