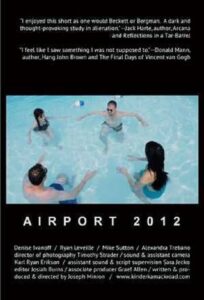 'Airport 2012' chronicles an alienating partner-swapping encounter in a New Jersey motel on Election Day, 2012. Four very different characters interact in darkly comic and unsettling ways - no one ever really connects with anyone else in an activity that had been orchestrated, ironically, expressly for the purpose of connection, or at the very least sexual connection. The day and then the night pass; two couples have 'fun'; a president is re-elected, and by morning we are left wondering 'now what?'

Airport 2012 from Joseph Minion on Vimeo.