Adam and Eve are cast out of the Garden of Eden because of eating the forbidden fruit. Outside, they encounter other people, learn how to fend for themselves, learn important values in life, and find that they are better off outside paradise.

Eve and the cro-magnon man, Bearkiller meet when she and Adam get separated in the wild because of some petty squabble. Bearkiller puts her in captivity but feeds her well and soon unties her. He also defends her from some hostile tribesmen.

Eve warms up to Bearkiller, so she lets him bang her from behind while lying face down on the mud. Meanwhile, Adam is wandering aimlessly in the wilderness until he chances on Eve lying beside Bearkiller. Eve waves at him, but Adam is disappointed at what he sees and leaves.

When Bearkiller, Adam and Eve are together, Bearkiller displays his dominance over Adam by killing a bear that is attacking Eve (hence his name). When Bearkiller checks to see if Eve is ok, envious Adam tells him not to touch her. They fight, and Bearkiller dominates Adam again and is about to crush his head with a rock has Eve not stop him. Bearkiller leads Eve away, but she stays with the cuckolded Adam, still down on the ground because of his fight with Bearkiller. She probably stays with him because of pity and a sense of responsibility, like how most women feel when they cheat but do not leave their wimp husbands. Eve, however, tells him it’s because she loves him and that the other guy means nothing to her (yeah, she just wanted some bad boy’s cock inside her temporarily like the rest of them cheating wives do, that’s all).

Eve gets pregnant. Although She and Adam have sex after her fling with Bearkiller, there’s a huge chance that the father of her baby is the latter. 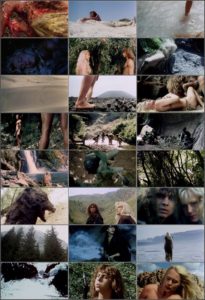 Caution: Aside from additional information for the movie Adam and Eve (1983), the links below may contain download links. I am not responsible how you will use them.