Six couples swap wives for a tv show to experience how the other couple lives. Unlike the tv show that it parodies though, the swapping in this video knows no limit and extends up to the bedroom.

Some of the wives here are hot. Personally I like Bobbi Starr and  Kagney Linn Karter, but the others are sexy as well.

Diane is interested in African anthropology, the contribution of African culture throughout the century but what she really wants deep down is a plain big African cock. Lucky for her because she is paired with the black guy James.

One night, Diane sits beside James wearing a sexy see through lingerie. she tells him she needs to be dominated by a big powerful gangster. She sucks his dick and screws him.

Joey treats Barbara like a gangster treats her bitch. He even makes her work in his ice truck. Thus, it’s his son Rob who is getting on her good side. So when Richard confesses that she screwed Marie, Rob advises her to get back at him. Barb tells him his father is not even there. Joey says, well “I’m here.” So as soon as she says “I guess” Joey attacks her, and they have sex.

From the moment Enrique steps in the Whitaker’s home, he immediately puts his moves on Edie, gives her flowers, appreciates her beauty and puts his arm around her.

Meanwhile, Gloria spits on nice guy Steve because he didn’t take his shoes off when coming in. Steve hopes Edie and Simon are going a lot better, but he need not worry about that, because at that moment Enrique is massaging his wife’s bare feet and legs using lotion.

Gloria teaches Steve dancing and insults him when he makes mistakes and spits at him again. She goes straight to fucking him since she says if he cannot cook, dance  and massage, then he better satisfy her in bed. Well at least he did perform ok in bed and she likes it. 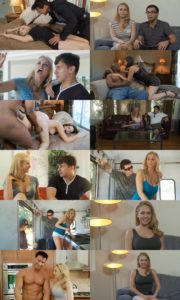 Caution: Aside from additional information for the movie Official Wife Swap Parody, the links below may contain download links. I am not responsible how you will use them.