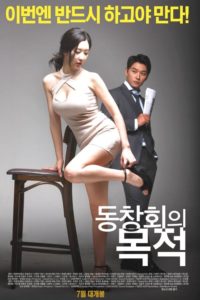 Dongchul, who is managing a small bar, is always enthusiastic about his school reunions. One day, Yujin, who has never showed up to a reunion, shows up at his bar. Her baby face and vitality make her unlike other married women and all the men fall for her, especially Dongchul. They start a relationship but it abruptly flames out due to the sudden arrival of Dongchul’s wife. As they get to know each other's secrets, will their love be allowed to grow?

Yujin attends her high school reunion. She looks hot so the guys are all over her and the girls are jealous. Dongchul makes his move on her by accompanying her home due to her inebriated state. He learns that her husband only comes home during weekends. She agrees to meet him at lunch tomorrow after some push and pull between them.

The two proceed to have a date the next day. He keeps flirting with her, usually in a lewd, joking way, while she fends off his advances. He asks if her figure is real and wants to touch her boobs to find out. She refuses, of course. He also jokingly tells her to have sex with him as payment for what he spent that day. Again, she refuses.

Wife goes to camp and makes out with former classmate

The two, along with four ex-classmates, go camping together. She still acts like she's not really into him. At one point, he embraces her from behind while she's washing some veggies in a kitchen sink. Tired of his aggressiveness, she mockingly kisses him, slipping her tongue a little bit inside his mouth, then tells him that he's not a good kisser.

The campers play a game where a person picks off food from another's body using his or her mouth. The two are picked, so she lies on the floor and he picks off pieces of chocolate from her face and neck. His mouth lingers for a while when he picks off a chocolate piece under her nose, licking her lips and slipping a little tongue in her mouth while he's at it. Then, he goes for the chocolate piece on her neck and licks her neck a little. She shouldn't be doing this kind of game, considering that she is a married woman.

The two take a walk and he asks her to have sex with him. She refuses, of course. He leads her to their tent and shows her two of their friends fucking inside to convince her. He tells her that he's not asking her to get married or anything, that it will be just for fun. He kisses her and she kisses him back but eventually, she pushes him away and goes home mad.

He follows her home and knocks on her door. She opens it when he says that he justs wants to talk, but he kisses her anyway when he gets in. She resists him, telling him that he has a wife and kids (screw his wife, what about her husband?), but eventually, she gives in and makes out with him in the living room, turning over the framed photo of her and her husband that is on the coffee table. Then, she has sex with him in the bedroom. It's a long and hot sex scene, and at one point she even takes control and rides him. I like how she is really acting hard to get and yet when she does get in bed with him, she gives him a great fuck, like it's a good reward and all his hardships are not in vain.

In the morning, he asks her if last night was good. She breaks his balls by saying that he came too fast. His ego is pricked, and then to add insult to injury, she tells him to leave immediately. Even if he has already fucked her, she has become a bigger challenge for him.

Some few days later, he comes over. After some push and pull between them, they make out and would probably have sex again but her mother-in-law arrives. He has to hide in the cabinet while she entertains her at the door. She loses her sexual appetite after that and just tells him to leave, to his dismay.

Wife fucks former classmate again, this time at his place

The two have a date and then they fuck at his place. Another long and hot sex scene but the first one is better. He doesn't know that his wife has arrived from overseas that day and they are nearly caught.

After his wife leaves, the two have a dramatic talk, where she reveals something that might change the cheating angle of the movie.

He finds out later that his wife had been cheating on him overseas, too. His wife is kinda cute so I would also have loved to see her in action.

It's always hot when a wife resists before giving in to her seducer. And in this case, it's even better because she continues on breaking his balls/putting up resistance even if he has already fucked her, making her a real challenge and therefore, a real turn on for him and for us, audience.

As I said earlier, a plot twist in the end may change the cheating angle.

Aside from giving us erection, the movie also works as a good romantic movie and it gives us a feel-good, happy ending as a glimmer of hope is seen between the relationship of the two main characters after the things they've been through.