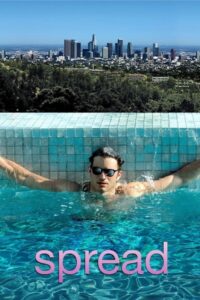 It's a business doing pleasure.

In Los Angeles, Nikki is homeless, car-less and closing in on 30, but he's amoral, good-looking, and adept in the sack, moving from one wealthy woman of 35 or 40 to another, a kept boy-toy. His newest gig, with Samantha, an attorney whose house overlooks L.A., is sweet, although it's unclear how long she'll put up with him. Then Nikki meets Heather, a waitress. Is the player being played, or might this be love? What will Nikki discover?

Nikki (Ashton Kutcher) uses his good looks to take advantage of rich, hot cougars. His latest prospect is Samantha (Anne Heche) and he manages to become her kept boy-toy, giving her good fucks while staying at her affluent house for a while. When she goes out of town, he holds a party at her house and fucks other hot women who are not necessarily cougars.

Nikki then meets Heather (Margarita Levieva), a gorgeous waitress at a diner. She's a challenge to him because she rejects his advances. But eventually, she softens up and warms up to him and he is able to fuck her in Samantha's place when the latter is out of town.

Aside from Heather driving an $80,000 car, Nikki finds some cigars inside it, prematurely concluding that Heather is a female version of him: a.k.a. a chick who beds rich men for their money. He confronts her with it and parts with her for a while. But they get back together again and continue their love-hate relationship. He crashes in her place and they fuck a few times.

Later, Heather confesses to Nikki that she has a rich fiance in New York and is contemplating breaking up with him because she has fallen for Nikki.