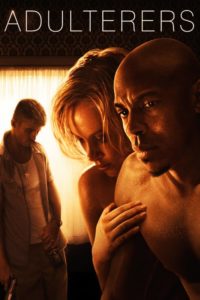 A man returns home to find his wife cheating on him on their anniversary. He holds her and her naked and humiliated lover captive at gunpoint while he decides whether or not he’s going to kill them. The story, inspired by true events, takes place over one day and is set in New Orleans during a stifling heat wave.

Details for the movie Adulterers (2015)

It is Sam and Ashley’s anniversary. Sam calls Ashley while driving to work to tell her that he will be working overtime tonight. But he does tell her to be ready for him when he comes home at 11:00 PM because he wants to do some “awfully sweet things to her”. She seems receptive, flirting back at him, and tells him she loves it when he goes bad on her. However, she is actually waiting for her lover to come by at her house so that they can fuck during lunchtime.

Sam catches Ashley in the act

Sam comes home during lunchtime to drop the flowers and chocolates that he is going to give to Ashley for their anniversary. He expects Ashley to be at work but he notices that her bag is on a table in the living room. He calls Ashley to ask if she forgot her bag, then he hears her phone ringing upstairs.

Sam comes up and can already hear from the hallway his wife and another dude moaning inside their bedroom. His expression changes and he starts to cry, because I guess he already has an idea what he is going to see when he opens their bedroom door.

Sam opens the door to the bedroom and true enough, he sees his wife being pounded from behind by a black, muscular dude. His wife is really shouting and moaning loudly, indicating that she’s really savoring and liking what the black dude is currently doing to her. Sam comes down, gets his guns and shoots the two, but it turns out that this is a fake scene (or this could be the real scene while the rest of the scenes in the movie are the fake ones, the movie has some fantasy and reality scenes intertwined).

In the next scene, we see Sam confronting his wife and her lover and holding them at gunpoint instead of killing them outright like in the previous scene. The rest of the movie shows him interrogating them about their affair.

We have some juicy dialogues in the interrogation scene, and I will feature some of them.

Sam: How many times have you been fucking my wife?

Sam: Do you always fuck her in my house?

Sam asks the black dude where they met. When he answers that they met online, Sam recalls his wife telling him that she was just “reconnecting with old friends from her high school” during that time.

Sam: I wanna know what it’s like fucking my wife (referring to the first time that the black dude fucked Ashley).

Black Dude: It was okay.

Sam: Just okay? Motherfucker. I know for a fact it’s a whole hell of okay.

Black Dude: Fine. It was good.

Sam: She got some real good pussy on her, don’t she? So tell me, did you ass fuck her?

Black Dude: I don’t know. You can ask your wife, I guess.

Damn, how sweet those dialogues are, right? Anyway, Sam continues interrogating the guy.

Sam: Did she suck your cock? She do that little thing with her tongue? You know what I’m talking about (he makes a lip-licking gesture using his tongue).

When the black dude doesn’t respond, he makes Ashley suck the black dude’s cock in front of him so that she can help him remember. He tells her to “go ahead and pop it in her mouth like she did before, and pretend like he ain’t there.” So Ashley dives in and sucks the black dude’s dick while crying.

Meanwhile, Sam answers Ashley’s phone and talks to her boss while he watches Ashley suck the black dude’s cock. Unfortunately, we don’t see much in this sucking scene.

Sam notices that the black dude has a ton of money in his wallet. He comes to a realization and asks him if he is paying his wife for sex. It seems more unacceptable for him if that is the case. He turns to Ashley for an answer. Ashley tells him that it’s not like that but quite similar. She tells him that she is just going to loan it from the black dude because she is going to use the money to buy a guitar for Sam as an anniversary present. She swears that it’s a loan, that she didn’t ask for it from the black dude on their previous fucks, and that she is planning to pay him back. Sam asks her how she is going pay him back, “With his dick in your mouth?”

Ashley has always been a cheating slut

Ashley: It’s different. ‘Cause you I made love. With him (black dude), It’s some sort of fantasy sex or something.

Sam: Fantasy sex, huh? If that’s what you wanted, why didn’t you ask me for that? Any kind of sex you wanted to have we could’ve had! All you fucking had to do was ask,

Ashley: I ain’t a whore.

Sam: Here you are, sitting on a bed naked, across from a man that ain’t your husband, you just got done fucking. Tell me, what do we call you, then?

Ashley: I don’t know. I always had a tough time being faithful. But when I met you, God, I tried to fall in love for the first time. I mean, I wasn’t even interested in other boys.

Sam: How can you even say that? You just got done fucking another man on our God damn anniversary!

The black dude’s wife comes over for a revenge fuck

The black dude’s Asian wife calls him on his phone. Sam tells him to answer it. Eventually, the Asian wife finds out about the situation and Sam leaves it up to her to decide what to do.

Well, here is what the Asian wife does: she comes over, wearing a sexy, white dress that gives the “fuck-me” vibe, then she lets Sam fuck her from behind in front of their respective partners.

Sam’s wife weeps while the black dude shouts and punches the wall when he sees his wife moan loudly and her body lurch forward and backward because of the force that Sam is giving her from behind. The Asian wife shouts during orgasm while giving the black dude a nasty, vengeful look.

After they’re done fucking, the Asian wife tells Sam she doesn’t care what he does to her husband, then leaves and says that she was never there. Fuck this is a good one. The two best parts are the scenes where Sam catches his wife moaning loudly while getting fucked and the black dude’s Asian wife coming over for revenge sex. The dialogues are very sexy.