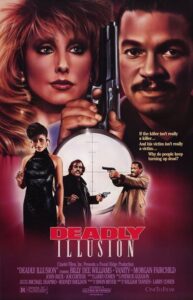 A private eye hired to kill a man's wife warns her instead and then finds both are impostors.

A stranger pays Billy Dee Williams to kill his wife. But instead, Billy, who is a private detective, tells the wife what her husband tried to do. When she turns up dead anyway, Billy is suspected. Hopefully, with the assistance of his secretary/girlfriend, he can solve the case before the police catch up to him.

27:15 The detective asked by the husband to kill his wife (Morgan Fairchild) comes to the wife's house but instead of killing her, he ends up making out and having implied sex with her. With plot twist.