Masha is a young girl from the suburbs from an extremely poor family. She lives in her reality, where she cares for her grandmother and her younger brother, and dreams of her own family and a husband; she badly longs for warmth, love and care. She knows nothing about her serious illness. Her life abruptly changes after a meeting with Matvei Sergeevich, a cardiologist who saves her life. 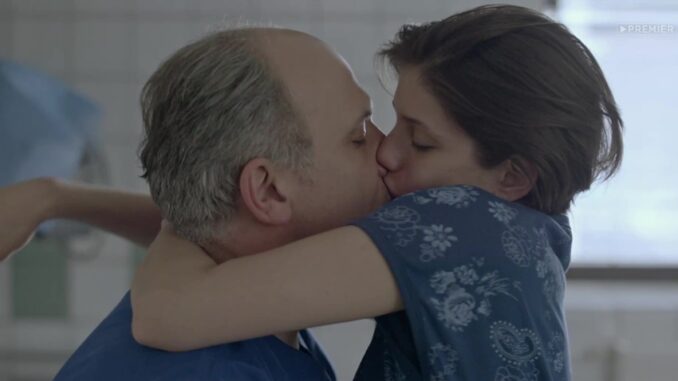 Masha (Anna Chipovskaya) overdoses at a party and has heart surgery. She meets the surgeon who operated on her and as the movie progresses, falls in love with him despite already having a boyfriend.

At 49:56, Masha dreams of making out and having sex with the surgeon.

At 54:57, the surgeon checks the surgery incision on Masha's chest while she is in her bra. It becomes a sexually tensed moment for them which leads to them almost making out (their lips touch) have they not been interrupted by a door knock. Masha masturbates in her bathroom when she comes back home from the hospital.

At 58:30, Masha has passionate sex with her boyfriend. The lust she feels is inspired by the surgeon, and halfway through her lovemaking with her boyfriend, she imagines that it's the doctor who's banging her from behind in a standing position.

Masha and the surgeon meet in a bar, but they came with different people. When it's time to leave, she offers to take the very drunk surgeon home, leaving her sole male companion behind. At the surgeon's home, he is too drunk to fuck her that evening, so Masha just lies down beside him, maybe kisses him lightly on the lips a little, and sleeps. In the morning, they fuck hard on the window sill (1:14:59).

At 1:22:33, Masha and the surgeon have sex again. He makes her suck his dick while he's standing and then he fucks her from behind while she's blindfolded. She also sits on top of him while he cups and fondles her boobs.

Meanwhile, Masha's boyfriend starts looking for her and investigating where she's going off to. After finding out that she's fucking the doctor, he confronts her and almost comes close to physically hurting her but is able to still control himself. He then follows her one night in his car as she rides her bike to the surgeon's place...

We see Masha's butt but not her boobs in her sex scenes, but nevertheless, they're still hot.