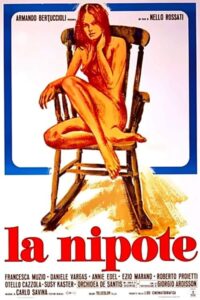 After her mother’s death, Francine, a shy young woman goes to her uncle Michel’s summer villa. He is almost impotent and although living with Zoe, a former stripper, prefers chasing Doris, the maid. Antoine, a young virgin man and Michel’s son, comes to the villa and quickly learns the ways of sex with Francine who replaces the maid who has been sacked. Meanwhile, Zoe has some fun with Pierre, a friend of the family. Michel dies of a heartstroke between Francine’s arms, who is wearing Zoe’s stripper clothes. Both Michel’s burial and Francine’s wedding with Antoine are celebrated on the same day. On the very wedding lunch, Francine is already busy playing footsy with another man.