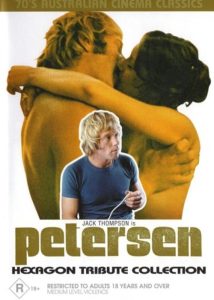 A married electrician and former football star begins a degree in English at university, where he has an affair with his professor's wife.

Tony Petersen, a married electrician and ex-footballer, goes to university to study English. Petersen is odd man out at the uni. He receives extracurricular help from his stuffy professor's beautiful lecturer wife in her office. Their get-togethers there are quite rootine. The professor is also seeing one of his students after class. Petersen and the professor's wife talk about having a baby. But then she accepts an appointment to Oxford, provoking a rage in Petersen...

Petersen bangs the professor's wife, who also works at the college, in her office (10:50). The professor is about to knock at his wife's office door when he hears them moaning inside. He already has an idea that she's being unfaithful to her. His first reaction is to turn around and leave but he decides to knock anyway. When his flustered wife opens the door, he enters and says something snarky to the two.

Petersen and his wife visit old friends of theirs, another couple. Petersen starts making out with the other wife (who was the first one to come on to him) in the kitchen while his wife and the other husband are talking in the living room (41:21). The other husband comes into the kitchen and catches them smooching.