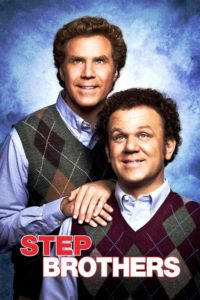 They grow up so fast.

Brennan Huff and Dale Doback might be grown men. But that doesn't stop them from living at home and turning into jealous, competitive stepbrothers when their single parents marry. Brennan's constant competition with Dale strains his mom's marriage to Dale's dad, leaving everyone to wonder whether they'll ever see eye to eye.

Derek, along with his wife and kids, visits his mom who just remarried. After dinner, he has a heated discussion with his brother Brennan and step-brother Dale. Dale punches him in the face.

When Derek and his family are about to leave, his wife Alice (Kathryn Hahn) pulls Dale to a corner and tells him that she got turned on when she heard that he punched her husband in the face. Apparently, Alice hates her life with her perfectionist and overachieving husband. She tells Dale that she is gonna pleasure herself tonight with the image of him punching her husband. Then she makes out with him and gives him her number.

It's Derek's birthday and they celebrate it in a restaurant. Dale uses the men's bathroom and is surprised to see Alice come out from one of the cubicles. She goes immediately into business and pulls down Dale's pants and hops on him. She humps him and rides him like a cowboy in a standing position. Dale ejaculates in no time inside her. Afterward, they return to their table like nothing happened.

Derek's family has dinner again at his mom and stepdad's place. Alice sits between her husband and Dale. She arranges the vegetables in her plate to read "Let's fuck right now!" and discreetly shows it to Dale. She even uses her wedding ring for the letter 'o' in the word 'now'. Then she excuses herself to check her hair in the other room and exits the dining room.  Dale also excuses himself and follows her. He has to use another path so that the people in the room will not suspect a thing. 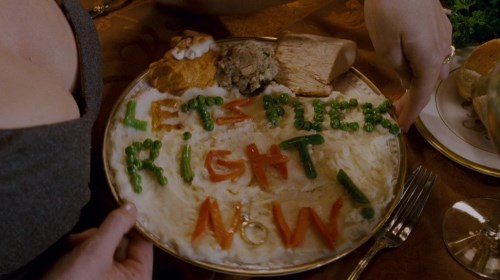 Dale and Alice fuck in the adjacent room. She tells him she couldn't eat another bite of turkey without thinking of him inside her. Dale pounds Alice from behind. Alice is moaning loudly and their family can hear it in the dining room. Brennan says it's the ghost in their house. Dale is pounding so hard that Alice loses her grasp on the wall. This sends them bursting through the dining room door and right in front of their family, including Alice's husband Derek.

Now it's a good thing that Dale and Alice did not take their clothes off. Their family can't see that Alice's skirt is lifted at the back and that Dale's dick is inside her vagina at that very moment. Brennan's mom asks them what they're doing. Dale tells them that Alice's back went out while moving a chair in the living room. Thus, he gives her a massage so that her muscles won't seize up and pretends to massage Alice's shoulder while pulling her hips toward him. Remember that Dale's dick is still inside Alice. So when he pulls her towards him, she feels the sensation of his dick sliding against her vaginal walls and moans loudly. But they make it appear that she moaned because of his massage.

The two retreated backward without changing their position and close the dining-room door. A few minutes later, they come bursting in through the same door again. This time, Dale is carrying Alice in front of him, with his dick inside her and Alice's legs wrapped around his waist and her arms around his neck. Their excuse this time is that Alice's muscles have gone into a real bad spasm so Dale has to put a yoga move on her. Since they have their clothes on and this movie is a comedy, the family did not put malice into it and the two got away with it.