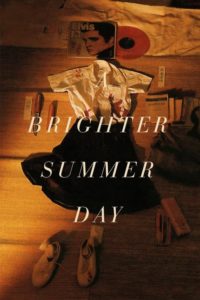 A boy experiences first love, friendships and injustices growing up in 1960s Taiwan.

There are two cheating girls here, namely Ming and Jade.

Ming is the girlfriend of Honey, the leader of the Little Park Boys gang. Honey is currently in hiding so the gang's temporary leadership is being contested by Sly and Honey's brother. One night, Sly is cornered by their rival gang in a building inside the school. The rest of the Little Park Boys come to the rescue. Among them is Si'r, the main character in the movie. He witnesses that a girl is with Sly that night, but he doesn't really see her face because she is able to get away fast. He thinks it's Sly's girlfriend, Jade, but apparently, it's Ming. So Ming is hanging out with Sly while her boyfriend is away. Sly tells Jade to lie and tell everyone that it was her (Jade) whom he is with that night because he is afraid that Honey will find out.

Eventually, Ming starts to hang out with Si'r. They really are not kissing or anything, but it seems that Ming has gained a reputation as a flirtatious girl because she hangs out with different guys. Later, when Honey dies, Si'r begins a relationship with Ming. However, she reveals to him that she flirts with other boys, including an adult doctor who treats her mother, and this disturbs Si'r.

Si'r has a best friend named Ma. He is handsome and is sort of a playboy. Sly tells Si'r that Ma has been messing with Ming ever since her mother started working for Ma's family and they started living in Ma's home. Si'r confirms this with Ma. Ma tells him that it's true, but that he shouldn't be too serious about chicks. So yeah, Ming is cheating on Si'r with his best friend. And even though it isn't shown, unlike Si'r, Ma probably scored with her, because Ma is a playboy while Si'r is the silent, introverted type.

Jade is the girlfriend of Sly and she has caught Ma's attention during a concert. He smiles at her and she smiles back. Inside the concert hall, Jade returns Ma's gaze and smiles back at him while sitting beside her boyfriend. He motions for her to come out so that they can meet outside. He comes out first but something happens so when Jade comes out a little later, she doesn't find him outside.

In the next few days, Ma dates Jade together with Si'r and Jade's friend. They watch a movie and Man runs his hand on Jade's thigh. Later, they hang out at the school grounds and this is where Ma and Jade hug and kiss (it's dark and really brief) while standing.