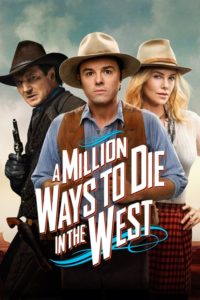 As a cowardly farmer begins to fall for the mysterious new woman in town, he must put his new-found courage to the test when her husband, a notorious gunslinger, announces his arrival.

Albert, meanwhile, hangs out with Anna (Charlize Theron), who, unknown to him, is the wife of a notorious gunslinger. They develop feelings for each other and they kiss briefly.

No sex scenes and nudity.