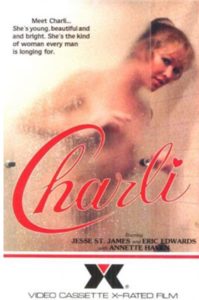 Charli is a film for lovers. It is the story that every man and every woman who have ever truly been in or out of love will identify with. Instinctively conceived and sensitively produced, Jesie St. James and Eric Edwards play a married couple whose marriage is on the rocks. They keep the fires burning within as they fantasize about making love to those around them. Charli is a love story, a real SEXY love story.

Charli's only cheating transgression is when she makes out a bit with a friend of her husband at the end part of the film. She ends it herself and doesn't proceed to have sex with him because she doesn't feel that it's right. Earlier in the film, she fantasizes about having sex with her female friend (Annette Haven) while she is giving her a massage.