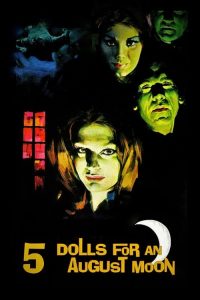 The Island of Terror!

An industrialist invites his colleagues and their wives to relax on his private island so they can exploit the monetary value of one of the guests' revolutionary resin formula, but a killer within the group disrupts the proceedings.

Edwige Fenech is the cheating wife. She makes out with Jacques, the houseboy, on the boat at 8:20. She comes to the boat to fuck him later that night but sadly, someone killed him already. Her husband knows about her affair but is just complaining that she shouldn't be doing it with the houseboy. Why not seduce the other rich husbands in their company, for example, or the professor, to gain an advantage? At 34:26, she tries to seduce the professor, but fails.