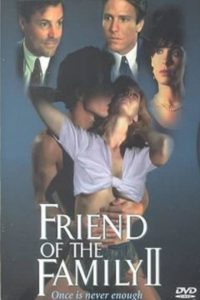 Alex decides to have an affair with a woman named Linda while he is on business in New Orleans. When he returns home to his wife and child, he is surprised to find that his wife has hired the off-kilter homewrecker as a nanny to their baby. Alex must find a way to stay cool and not let his wife know the true identity and intentions of Linda.

At the beginning of the movie, Alex sees Linda arguing with a guy at a restaurant. The guy leaves without paying for their bill. Linda has no money too so Alex pays for her bill and then drives her home. They talk inside her place. Linda mentions that the guy in the restaurant is her fiancee and that she thinks that he's cheating on her, hence, their argument. A few moments later, Linda has sex with Alex.

Linda's fiancee visits her with flowers in his hand. She breaks up with him (or has broken up with him via a letter she sent earlier), telling him that she's in love with someone else. He sneaks around for a while in front of her place and sees her make love to Alex through the window. He cries.

After sex, Linda tells Alex that she loves him. He asks her "What about your fiance?," to which she replies "I can never be with him after being with you."

When Alex dumps Linda a few days later, she calls her ex-fiance, telling him on his voice mail that she really needs him. Lol, so after she gets dumped by her new lover, she wants her ex-fiance to comfort her (and maybe get back with him) after breaking his heart for the new guy. She's my kind of slut, I guess. But her ex-fiance won't be able to show his cuck side to her anymore because she finds him dead on her floor, apparently shooting himself.