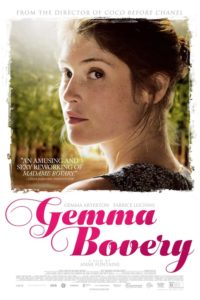 Gemma Bovery (Gemma Arterton) and her older husband Charlie move from London to a small town in Normandy, France. Their new neighbor Martin Joubert (Fabrice Luchini) is the baker and a fan of Gustave Flaubert's Madame Bovary. Martin is immediately enchanted by the lovely Gemma and her literary name. She gets restless and has an affair with a young man named Hervé de Bressigny. She is surprised by the return of her cheating former lover Patrick. 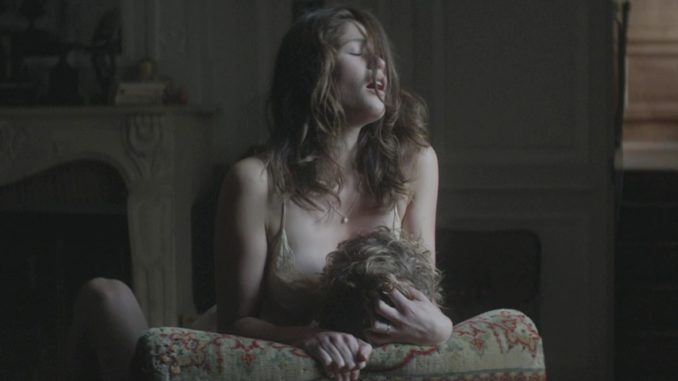 Gemma Bovery (Gemma Arterton) and her older husband Charlie move from London to a small town in France. There, she starts an affair with a young man named Hervé. She has sex with him at his place (actually, his parent's place), riding him on the couch and making out with him later in a standing position.

When her husband is out of town and won't be back till Sunday, Gemma brings her young lover to her place. We see them make out in bed after sex and also while standing.

Wearing an overcoat, Gemma tells her husband that she'll take the dog out for a walk. Along the way, she takes a pair of stilettos from her pocket, wears them and then proceeds to go to her young lover's mansion. Upon entering the mansion and being received by her young lover, she takes off her overcoat to reveal that she's wearing nothing underneath but a two-piece sexy lingerie. She tells him that they've got an hour before her husband will wonder what's taking her so long. She and her lover proceed to fuck on top of a table. This scene is the hottest scene in the movie. Plus, we also get to see one of Gemma's boobies as it peeks out of her bra and the young guy also sucks it a little bit.

Gemma's husband comes home and finds her in the kitchen with her ex. He thinks that he is fucking her from behind against the kitchen sink but it turns out that he's giving her the Heimlich maneuver because she's choking on a piece of bread. Well, prior to that, Gemma's ex-boyfriend was kissing her neck from behind, seducing her. But she was saying that she doesn't want to be with him anymore so I'm not sure if they would have been fucking when her husband arrived had she not choked on the bread.

The hottest scene is when Gemma comes out wearing nothing but lingerie under her overcoat, telling her husband that she will just take the dog out for a walk, but actually coming to her young lover's place to be fucked by him. She also shows us her tit in that scene, which is awesome.