Playboy does to softcore sex films what HBO's Tales from the Crypt did for horror. Contains the stories: "Dogs Playing Poker"; "The Branding"; "The Portal"; "The Perfect Woman"; "Within Ten Minutes"; "Tango"; "The Houseguest"; "Cafe L'Amour"; and "The Wet Dream".

1) "Dogs Playing Poker": a smart art dealer is invited to play a poker game. He wins the game and the wife of his opponent, but he finds that he is not so smart as he supposed to be.

2) "The Branding": while filming a movie in Brazil, one crew member meets a Brazilian woman and resists to her harassment since he loves and is faithful to his wife. However, he does not resist her and will never forget his affair.

3) "The Portal": young men and women have a bacchanal in a fountain.

4) "The Perfect Woman": in a rainy night, a lonely man calls a call-girl service and requests the perfect woman for him. Out of the blue, a woman knocks on his door and she is simply perfect but is not the escort he asked for. When she arrives, he dismisses her services and learns a lesson.

5) "Within ten minutes": a nuclear missile is scheduled to hit a city in ten minutes. Two lonely women have to decide what to do within this period.

6) "Tango": a chauvinist is trapped with a feminist in an elevator during a blackout.

7) "The Houseguest": a divorced woman meets her former fiancé on the street. The man is a vagrant and she brings him home to bath, feed, and have sex with him.

8) "Cafe L'Amour": a man fantasizes with a woman that is sat at the next table in a cafeteria.

9) "The Wet Dream": a fish in the aquarium loves his owner; out of the blue, he transforms into a man and makes love with her. She decides to stay with him. My vote is seven. Stories 1 and 9 are cheating wife segments.

In the first story, "Dogs Playing Poker", a smart art dealer is invited by some shady men to play a poker game. At the venue, this fat, thug-looking player has his wife with her (maybe it's his place they're playing at). When the game finishes, he lost and vents his frustration on his wife by trying to hit her but the art dealer stops him from doing so. This makes him a hero to the wife and he is able to fuck her after her husband leaves. Hot sex scene and there's a plot twist in the end.

In the ninth story, "The Wet Dream", a fish observes his female owner (a black chick) and her husband daily from his aquarium. The husband tends to be busy and has little time for his wife. The fish turns into an Indian man and fucks the wife in the bathtub. 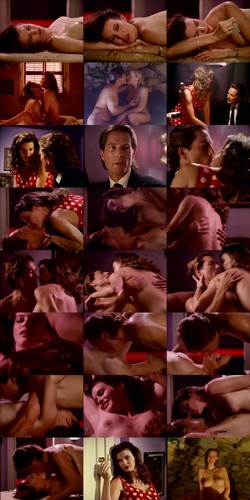