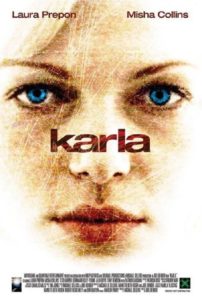 Evil has a beautiful face.

A true story about a woman who falls in love with a violent rapist and murderer. Karla Homolka marries Paul Bernardo despite already having aided him in the rape and murder of her younger sister. Through their marriage, he brags to her about other rapes he commits and involves Karla herself in the sexual assault and murder of two other female victims. Told from Karla's point of view.

In the end part of the movie, after running away from home because her husband beat her up badly, Karla goes to a bar one night and has sex with a guy inside the bar's bathroom.