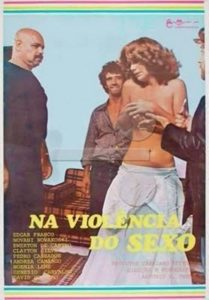 Brazil has released its share of wildly insane genre films that include the likes of GISELLE (a softcore erotica romp that includes a male-on-male encounter,and a male-on-male rape sequence), VIOLENCE AND FLESH, and this rape/revenge yarn about a newly married couple whose honeymoon is crashed by a quartet of lowly criminals (led by a David Hess-looking guy) that tie up and beat up the groom while they strip naked and rape his wife, with the sole gang member boldly refusing to join in, who soon pays for that turndown by having his three rapist friends crash into his place, strip nude, and explicitly rape his girlfriend while he's out of the house. The married couple attempts to repair their broken marriage but when the groom sees his bride cheating on him with her psychiatrist he loses it, grabs a gun, and declares open season on the rapists, his wife and her lover. It's a pretty gritty and bleak film that shows the pain of the aftermath of the rapes on both the couple and the gang member and his girlfriend and the grim results that follow it. It's a decent film for both fans of international genre cinema and rape/revenge cinema.