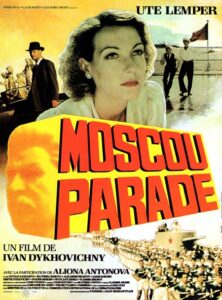 Set in 1930s Moscow. About an aristocratic woman married to a member of Josef Stalin's secret police who embarks on an affair with a baggage handler.

In this free-wheeling drama, dozens of little dramas center around an affair between the wife of an NKVD official and a baggage handler she has met. The woman, a former aristocrat, is relatively safe in Moscow in 1930, even though Joseph Stalin is running the country since she is married to a member of his secret police (the NKVD). Her husband's unit has been ordered to train a feisty black stallion for the Red Army commander to ride on parade. Hopeless love and aberrant sexuality seem to be a secondary theme, as one story concerns a lawyer who has fallen in love with his praying-mantis-type client, a woman who kills her bed-mates. Another story concerns a poet who has fallen in love with a ballerina who cannot accord his affection the kind of response he desires, which makes him suicidal.