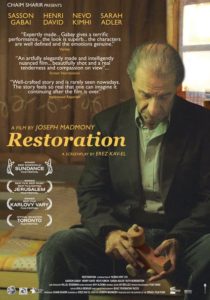 In one of Tel-Aviv's oldest neighborhoods, a senior antique furniture restorer is struggling to keep his workshop alive, confronting his own son who is trying to close down shop and aided by his young and bizarre apprentice who wishes to succeed him.

Anton, the stranger becomes involved in two triangles. One may seem at first sight a traditional husband-wife-lover triangle, but the young woman is pregnant and the husband is the young and greedy finance tycoon-in-becoming who looks so much like many of the materialistic Israeli (and not only Israeli) young men today, so the conflict is not only romantic but also a social one. The second one is a father-son-spiritual son conflict, between the old Mr. Fidelman, his son and again the stranger – which actually reflects as in a mirror the relation between the father, son and partner of Fidelman, Malamud, who dies at the beginning of the story.

1:16:30 - The pregnant wife and her father-in-law's young and bizarre apprentice kiss in an alley. After a while, she changes her mind and walks away.