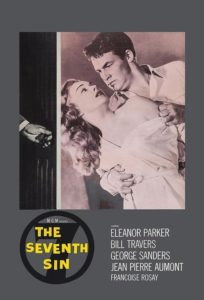 In post-WWII Hong Kong, unhappily married Carol has an affair with Paul. Her physician husband Walter discovers it and presents her with a choice: travel with him to China (where he will fight a cholera epidemic) or face the scandal of a public divorce. She persuades him to reconsider and he proposes an alternative. If Paul's wife will agree to a divorce and he marries Carol within one week Walter will obtain a quiet divorce. Carol presents Walter's 'deal' to Paul, who regretfully declines, citing respect for his wife.Carol sees as her only choice to accompany Walter to the village, where she meets booze-soaked Tim. He soon introduces her to nuns at the local hospital-convent and Carol begins to re-evaluate her self-absorbed life and character. Working at the convent, Carol learns she is pregnant. She tells Walter she's unsure who is the father and he regrets her honesty. Shortly after, Walter contracts cholera and dies. Carol returns to Hong Kong and an uncertain future.

In the first scene of the movie, Carol is in her bedroom in her own house with Paul, the man she's having an affair with. Someone's turning the door knob and a shadow walks by the window. Carol is petrified. She thinks it might be her husband Walter. Paul tells her to look outside because they can't stay there all day. When she goes out and checks, no one is there.

They both go downstairs. Paul apparently left his suitcase in one of the chairs. When Paul leaves, Carol's servant tells her that her husband had indeed come home earlier and thus, had seen Paul's suitcase and had found out about her affair.

Carol and Paul meet in a restaurant later to discuss about her husband finding out about their affair. They kiss.

Later in the movie, Carol tells Walter that she is pregnant and she doesn't know if it's Walter's or Paul's.

No sex and nudity.