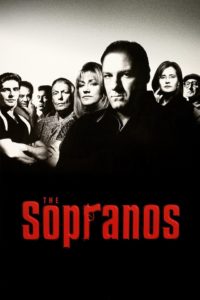 The Sopranos is an American television drama created by David Chase. The series revolves around the New Jersey-based Italian-American mobster Tony Soprano and the difficulties he faces as he tries to balance the conflicting requirements of his home life and the criminal organization he heads. Those difficulties are often highlighted through his ongoing professional relationship with psychiatrist Jennifer Melfi. The show features Tony's family members and Mafia associates in prominent roles and story arcs, most notably his wife Carmela and his cousin and protégé Christopher Moltisanti.

Christopher bangs his cousin's fiancee who is helping him get into acting. He goes into her hotel room one early morning to practice some dialogues with her. She is in her robe and is sitting too close to Christopher on the bed. They look at each's other's eyes and start to furiously make out and have sex. Quite a hot scene, helped by the fact that the fiancee (Alicia Witt) is hot. See Clips

Carmela Soprano makes out with the interior decorator that she hired when they are inspecting the walls of a room in her house. But feeling guilty, she stops their make-out session and the guy leaves. When she comes to him later in his office, ready to resume the affair and be fucked, he rejects her because he already found out by this time that her husband is a mob boss. See Clips