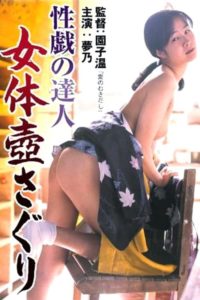 The film, often referred to as Sono’s straight pinku, concerns a pottery workshop run by Ms. Namie. Her husband, Tetsuya, taught her to become a Master Potter, but he is now bedridden. The students want to learn to become as skilled as Namie, and Tetsuya informs them that the key to good pottery is love, which means embracing group sex and covering each other in clay. When the group displays their pottery at the Female Pottery Show, they are beaten to the prize by a mysterious newcomer. Tetsuya goes in search of her studio and sees that she models her pieces using her breasts. Namie then realizes that she could make use of her unusually skillful mouth in order to make competing pieces.