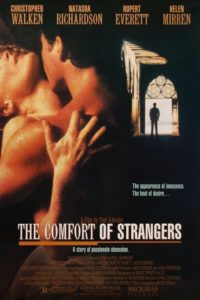 A story of passionate obsession.

The only wife watching/wife sharing-related scene we get from this film is that of Helen Mirren kissing the younger, more muscular husband briefly in front of her own husband at the end of the movie.

Which is disappointing because with this kind of plot setting, which is that of a young, attractive couple (whose wife is played by Natasha Richardson) getting stalked and then invited by an eccentric rich, older guy to his home, and the rich guy's also older but also attractive wife (Helen Mirren) getting attracted to the younger husband, you'd think that it's a guaranteed formula that the movie will give us some form of swinging, wife swapping, or even just plain wife sharing.

Or that maybe the plot will produce at least one cheating wife, or two at most and then we'd have a nonconsensual wife swapping.

But alas, we don't get any of those, which is a shame, because both actresses are pretty hot, even Helen Mirren at her age when this movie was made.

The younger couple has a sex scene, though, so I guess it's not all that bad if you're into regular husband-wife sex. I mean, I don't understand how you can get off to a faithful wife having sex with her husband and no one else, but yeah, it's there.