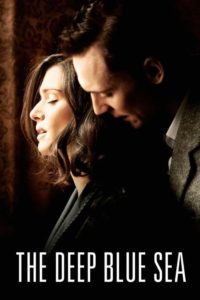 The wife of a British Judge is caught in a self-destructive love affair with a Royal Air Force pilot.

Set 'around 1950', The Deep Blue Sea tells the story of Hester Collyer, the younger wife of High Court judge Sir William Collyer, who has embarked on a passionate affair with Freddie Page, a handsome young former RAF pilot troubled by his memories of the war; that the mix of fear and excitement once in his life is missing.

The majority of the film takes place during one day in Hester's flat, a day on which she has decided to commit suicide. Her attempt fails and as she recovers, the story of her affair and her married life is played out in a mosaic of short and sporadic flashbacks. We soon discover the constraints of Hester's comfortable marriage, which is affectionate but without sexual passion.

As Hester's affair is discovered she leaves her life of comparative luxury and moves into a small dingy London flat with Freddie. Hester's new lover has awakened her sexuality, but the reckless, thrill-seeking Freddie can never give her the love and stability that her husband gave. Yet to return to a life without passion would be unbearable. The film takes its title from her dilemma of being between the Devil and the deep blue sea