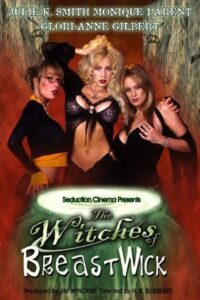 A man and wife are sucked into a whirlpool (in the wife's case, hot tub) of supernatural sex by a trio of randy, well-endowed witches.

A man is haunted by a recurring nightmare that three large-breasted women are trying to have sex with him. This is a nightmare? Apparently, it is and it disturbs him so much he decides to drive into the woods to see if he can find the source of his dreams. Monique Parent is the understanding wife who has sex with him in the forest to try to take his mind off of his witch problem. Soon they will run into the witches, (Glori-Anne Gilbert, Julie K. Smith and Stormy Daniels), at a house that looks remarkably similar to the house featured in "Lust Connection". When I say similar, I mean it's the exact same house. The guy must exorcise his demons by having sex with each and every woman in this movie. His wife also has sex with the women in the hot tub and bathtub. A lot of tub action in this one. It all leads to a showdown with the witches as they have plans for his horny mortal soul.

Original / Other Title:  The Witches of Breastwick, Brujas