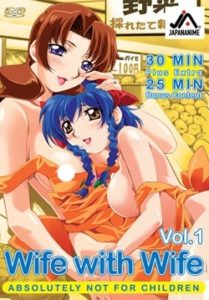 Story 1: This is a Housewife Supermarket!

Koutarou is the manager and the owner of Sakura Market. He took over this business after his father passed away. Sakura Market is a nice independent supermarket, however, is in jeopardy of being taken over by a large supermarket corporation, Kaneyu. The ironic scenario is that the take over act is being masterminded by Koutarou’s true brother, Taiyou!

Story 2: This is a Newlywed Paradise!

Yuusuke and Akira are newlyweds and tonight is their first night together. Things are getting heated up in bed, but Yuusuke has a little problem… he can’t ‘do’ it! His wife, Akira, tells him that it’s okay, but Yuusuke is not going to accept that as an answer, and who can blame him?

In episode 1, Koutarou fucks Touko, a married female employee in their family store, as her punishment for some work-related mistakes she did. The first time he screwed her was when she wasn't working yet at the store and was just a customer. He delivered her groceries to her house and she seduced him and made love to him while her baby was sleeping nearby.

There's no cheating wife in Episode 2, only a cheating husband.