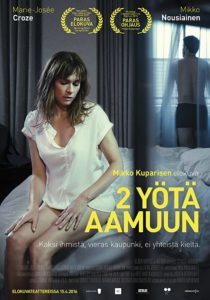 She must choose between her partner and a hot one night stand...

Caroline, a French architect in Vilnius, Lithuania, on business, has to spend an extra night in the city due to a delayed work meeting. At the bar of her hotel she meets Jaakko, a Finnish DJ who is in Vilnius for a gig. Caroline lets him understand that she doesn’t speak English, and Jaakko doesn’t speak French. Although they lack a common language, they find themselves enjoying each other’s company...

14:30 - One-night stand between the chick (whose partner is also a female) and the DJ. They kiss and have implied sex, after which we see her walk around the room topless and in her panties.