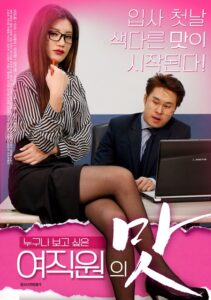 A Female Employee's Taste
Chief Park imagines going wild with Ga-hee while she thinks he's weird. One day, Chief Park leaves the office early and Ga-hee has sex with Woo-jin, a colleague she's secretly seeing. A while later, Chief Park comes back and finds Ga-hee in a half-undressed state. They end up having sex while Ga-hee's boyfriend witnesses it from a hiding spot.

The Taste of Theater 1
A couple is at the movies. Young-ho thinks there's no one around and starts touching Soo-ryeon, but she tells him there's someone sitting behind them. A while later, Soo-ryeon comes back from the toilet, but her glasses are broken and she can't see well enough so she sits next to a stranger, thinking he is her boyfriend...

The Taste of A Motel
Young-ho and Hye-jin drink together. She tells him she's going to sleep with her boyfriend for the first time soon and asks Young-ho to help her practice. He tells her not to worry, but he can tell that it's not her first time.

The Taste of Theater 2
A stranger named Soo-ryeon sits next to Young-ho who is watching a movie alone and heartbroken. She hears what's happened to him and starts to comfort him. Then they sleep together.