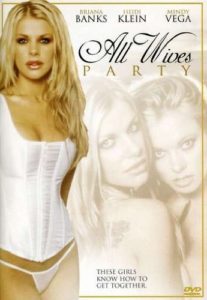 Christy and Erma visit a special club called Aphrodisia, where they are free to indulge their pleasures. The hostess wastes no time showing Erma just how the club works as she ravishes one of the house boys on the sofa, leaving Erma to watch.

Christy (Brianna Banks) and Erma (Mindy Vega) visit a special club called Aphrodisia, where they are free to indulge their pleasures. The hostess (Heidi Klein) wastes no time showing Erma just how the club works as she ravishes one of the house boys (Bobby Vitale) on the sofa, leaving Erma to watch and slide her hands beneath her sexy red dress. As with any Torchlight flick, there are camera angles that linger too long and some obvious editing flaws, but overall this was a decent scene with some nice realistic moaning from Klein.

Now that she is all tuned up, it's Erma's turn to be pleasured. Another houseboy appears to take care of her, and it suddenly occurs to me that maybe it's time to evaluate "houseboy" as a legitimate career move. Despite Vega's considerable physical appeal (and it is considerable), this scene never really takes off, and the music softens to a Zamfir flute-like piece that almost put us to sleep. When Vega is finally allowed to moan, and we hear the heavy breathing and the sounds of slapping flesh, it seems too little too late. Yeah right, who are we kidding? We watched every second.

Erma's hubby James (Frank Anthony) shows up and is quickly distracted by Christy after hearing what he is sure is his wife moaning in ecstasy in a nearby room. It takes about one second for James to forget all about that as Christy's tongue slides into his mouth and they head over to the sofa for a passionate make-out session.