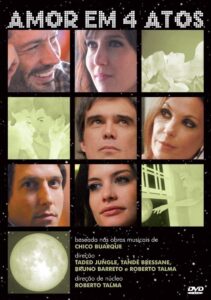 In the first episode, Marjorie Estiano plays Letícia, a filmmaker who gets involved with Antônio, a bricklayer.

A "love square" is depicted in the second chapter: Lauro and his wife Maria host a party at their mansion. Dora, Lauro's ex, brings her new boyfriend Fernando to the party. Maria develops a bond with Fernando during the night and starts an affair with him.

In the third and fourth episodes, Ary, a married man, becomes involved with Vera. After sleeping together, Ary finds out the next morning that she is a call girl.

Lauro and his wife Maria host a party at their mansion. Dora, Lauro's ex, brings her new boyfriend Fernando to the party. Maria develops a bond with Fernando during the night and starts an affair with him.

During the party, Dora swims topless with Fernando in the pool (looks harmless at this point). After which, they dance inside the house, with her still wet but with her dress on. Her husband sees them dancing and he looks jealous. He turns off the music, to everyone's dismay.

The next day, Fernando teaches Maria and another chick scuba diving. Maria secretly lets some air out of the chick's oxygen tank so that she and Fernando can spend more time exclusively with each other underwater. When they finish diving and go to the shore, her husband is there waiting for them, looking disappointed. He doesn't wave back when Fernando waves at him.

Lauro brings their friends yachting while Maria stays at their house. Fernando should be in it but Dora tells Lauro that he opts not to join at the last minute. As they sail, Lauro looks at Fernando waving from the shore and at her wife who is sunbathing in front of him. Needless to say, Fernando's intent is to isolate and fuck Maria. He enters the sauna room while she is inside, kisses her and makes love to her in the bathtub (26:40).