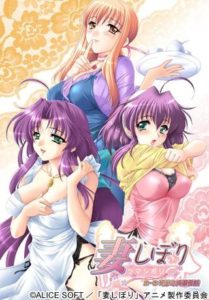 Kousuke lives a boring life without women. His father worries about him not having any girlfriend so he hatches a plan with his friend's daughter, Sakura, to setup Kousuke with Sakura's younger sister, Madoka. They force Madoka and Kousuke to live in the same house, hoping that they will develop feelings for each other and get married. Sakura also lives with them to keep watch. Kousuke's cohabitation with two beautiful sisters starts... a world filled with wives in need of some attention awaits him.

Initially, Kousuke assumes that Sakura is married and gets a boner on the thought that she is a hot, young wife. He has sex with her, but it turns out that she is already a widow.