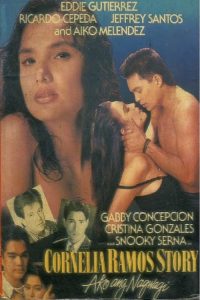 At 5:06:14 in the stream below, the rich man's wife tries to seduce her husband's eldest son on the beach... or does she? Maybe she just wants to be close to him as a stepmother as she lets him hold her hand for a bit and gives him some affectionate touches on the face and a light kiss on his forehead. We will never know what could have happened next because the son's girlfriend notices them and gets jealous (even she knows what's up), approaches them and starts a fight with her, disrupting whatever she intended to do.

At 5:34:55, the wife enters the driver's room. He is her ex-husband and she would like to rekindle her relationship with him, after rejecting him earlier because she tells him she already has a new husband. After one scene, they are making out on the bed when the rich man and his son and daughter enter their room and catch them in the act. The cheating scene is brief and non-explicit.

Note: This is a compilation of movies. The actual movie on topic starts at 4:04:33