A multi-millionaire client of a detective agency hires an investigator to get dirt on his wife, so he can divorce her. What the investigator finds instead is that the wife takes care of her elderly mother, likes to drink a little too much, and skinny dips in the ocean. He also sees that she is physically abused and when she apparently is going to attempt to drown herself, he dives in and saves her setting off a romantic coupling that innocently moves him unknowingly as the chief suspect in the husband's murder. The wife and the investigator have their first kiss at 36:37. Their first sex comes shortly after that. Their second lovemaking is at 1:04:14. I think it's better than the first as the humping action (with her on top) is a bit longer.

(Spoiler) At the end of the film, it is revealed that the wife has another lover. The investigator sees them kissing on a chair in their robes, with her sitting on his lap. 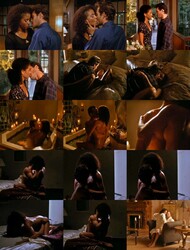