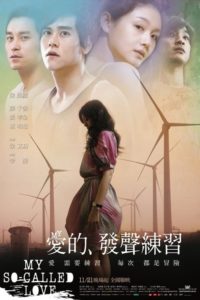 Raised in a broken family, Cat runs away from home as a teenager to escape her stepfather. In high school, she begins living with boyfriend Liam, but puppy love eventually ends in betrayal. While Liam is in the army, Cat, feeling lonely and poor, meets an older man through the Internet; Xiao Gu is looking for sex, Cat is looking for money. From lust comes love, until Cat discovers Xiao Gu is actually married. After ten years of ups and downs, Cat begins anew at age 28 when she meets the rich and kind-hearted Sunshine, but is he really her heart's final home?

As the description says, Cat cheats on her boyfriend Liam while he is in the army with a player-type guy that she meets on the Internet. It seems to be partially for money as she has to pay the bills, but it's also because she needs the company and touch of a man. Her boyfriend never really had sex with her yet because he says he loves her too much to have a physical relationship with her (yeah, he's weird, but a gay scene in the movie later might explain why he is like that). Hence, Xiao Gu, the guy she met on the internet is the one who does the honors of taking her virginity.

Liam finds out about Cat's infidelity and he breaks up with her, after which Cat continues to meet Xia Gu and have sex with him a few times.

In the latter part of the movie, Cat hooks up with a new boyfriend but she also cheats on him with Xiao Gu (arguable if she and the new guy are already a couple at this point, though). She meets Xia Gu on a beach and they make out and assumingly have sex in an abandoned lighthouse because they are taking their clothes off just before the scene cuts off. She tells him that she wants to have a child with him. They have an argument about it but eventually, she does get pregnant. His new tool boyfriend, instead of asking her who the father of her child is (because he knows that he isn't), asks her if she can be the father instead.

Sex scenes are quite lame as we only see the naked back or head of Cat mostly.

Note: has a Blu-ray release in the torrents with english subs.