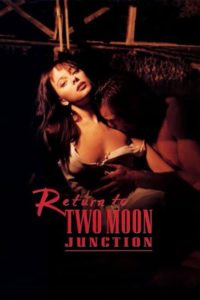 She Had Everything Except What She Desired Most

Savannah Delongpre is a wealthy fashion model living in New York City who returns to her small town in Georgia to visit her wealthy grandmother Belle as well as walk down memory lane to remember her childhood with some of her friends still living there. During that time, Savannah meets Jake Gilbert a rugged drifter/artist living on the property called Two Moon Junction owned by Belle and whose family has a feud with Savannah's for decades. Desperate to forget her stressful life, Savannah eventually begins a sordid affair with Jake, despite opposition from Belle claiming the man is not right for her or anyone. But Savannah's strongest opposition comes from her possessive boyfriend Robert Lee who later arrives and plans to break Savannah and Jake up by buying the Two Moon Junction property to evict Jake from the area.