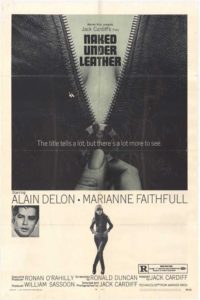 Newly-married Rebecca leaves her husband's Alsatian bed on her prized motorbike - symbol of freedom and escape - to visit her lover in Heidelberg. En route she indulges in psychedelic reveries as she relives her changing relationship with the two men.

One morning, Rebecca leaves Raymond, her still sleeping husband, and zooms off on her motorcycle to see David, her lover. When she reaches David's place, they kiss and have implied sex.

During flashback scenes, we learn how Rebecca's affair with David started. When Rebecca and Raymond (still just engaged that time) stayed at a ski resort, David entered Rebecca's room and fucked her. At first, she thought it was Raymond but after sex, she just knew that it was someone else who made love to her.

When David visited Rebbeca's father's book shop a few weeks later, she confronted him and told him that she knew it was him who fucked her. They drove to a cabin in the woods and fuck outside of it (because it was locked and they couldn't enter).

David and Rebecca met again, he taught her how to ride a motorbike, then they had sex (after-sex scene only).

When Rebecca got married to Raymond, David sent her a wedding gift anonymously. It was a Harley, the same one she used to drive to him at the beginning of the movie. She used this too to drive and go to David to have sex with him again (only after-sex scene too).

In the end part, a sex scene of the two lovers is shown. This could be the sex they had when she visited him at the beginning of the movie because it's in the same place, or it could be a different instance because he has a different shirt.