Underwater no one can hear you scream.

After falling pregnant to Perth, her boyfriend's best friend, Ice commits suicide. She returns to haunt Perth while Tan seeks out the person who made her kill herself for his own revenge. 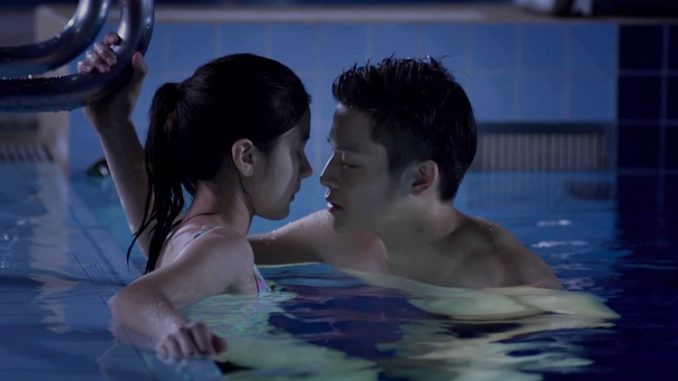 Ice is Tan's girlfriend while Perth is his best friend and a fellow swimmer in the school's swimming team.

Ice visits Tan in the school's training pool where he is training together with Perth. Perth jokes that they weren't really there for practice but for a tryst because they're secret lovers. Ice follows it up with her own joke, telling them that she's down with a three-way while glancing meaningfully at Perth.

Ice climbs on the diving platform, then takes off pieces of her school uniform and drops them down below. Tan jokingly covers Perth's eyes and tells him not to look at his stripping girlfriend. Sadly though, Ice doesn't really get naked as she remains clothed with her undergarments while standing on the dive platform.

On Ice's birthday, she is supposed to be taught by Tan to swim in the pool but he couldn't make it. Perth volunteers to teach her instead. She accepts the offer and gets into her swimsuit. Perth is then able to touch her body in different parts while teaching her in the pool. He might even have rubbed his dick on her butt when he gets behind her to teach her some proper swimming forms. Ice gets a cramp so Perth massages her calf. When Ice returns to the pool, Perth follows her, then kisses her on the side of the pool. Their lips touch a bit, but Ice moves her head away because she feels guilty because of Tan.

At their next meeting at the pool, Perth is doing a late-night practice. Ice informs Perth that she broke up with Tan, but they decide not to tell him yet about the two of them so it still feels like they're cheating. Perth tells Ice that sneaking like that around Tan is quite exciting.

Perth and Ice go up the tall diving platform. They are about to kiss when Tan arrives, so they hide. Tan climbs up the platform but Perth intercepts him in the stairs so that he won't see Ice. Tan tells Perth that Ice broke up with him. When Perth still won't allow him to go up the platform, he smiles and realizes that Perth has a chick up there. He tells Perth to enjoy his time with the chick and leaves, not knowing that the chick is Ice.

After Tan leaves, Ice and Perth kiss in the observation room. Ice asks Perth if he has a condom with him, anticipating that they are going to have sex and I assume they did exactly that, but we don't see it. What we get to see is a brief scene where Ice is riding Perth on his bed, but it seems to be part of Perth's nightmare.

Perth impregnates Ice. Tan pays for her abortion, not knowing at that time that the father is his best friend.