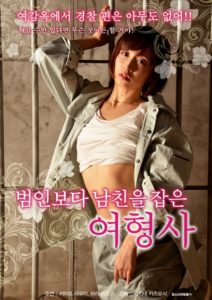 Kojima Ayano falls into a frame-up orchestrated by someone and turns from an ace detective to a criminal in an instant. She is charged with possession of drugs. She is imprisoned and tries to determine who framed her up but it's not easy doing her investigation from the inside. With the help of her husband, Takanori, she investigates her first suspect, Yamazaki, her boss, because she recalls an incident where she stumbles into some of his documents which could incriminate him. It could be a motive as to why he framed her: she wouldn't be considered a credible witness if she's a criminal and is in jail.

Ayano is lying in bed with her husband at home when the police come and arrest her for drug possession (one of the cops actually plants it in her purse). Inside prison, she comes inside the office of one of the jail officers and gets raped by him. When she gets back to her cell, her cellmate consoles her and they have lesbian sex. In the end, she is able to clear herself of the accusations against her and returns to her husband.