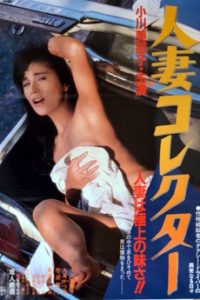 Wife Collector was director Hisayasu Sato's third feature film, made in 1985. It follows the actions of a disgruntled taxi driver who regularly rapes his clients, videotaping the act. One of his victims, whom he has for some reason developed a sort of attachment to (partly due to the physical remains of the act; the evidence being the bite mark left on his shoulder), can no longer enjoy sex with her husband. Instead, she takes to the streets and offers her body to whoever is willing, not charging anything. The woman's younger sister, who lives with her, has discovered all this and documented it with photographs that she eventually reveals to her sister and sister's husband before she decides to meet with the taxi driver herself.

Isao Nonaka plays a lonely cab driver who enjoys sexually assaulting and raping young girls in his car or apartment. He videotapes all his deeds and watches them later to relieve sexual tension. A woman named Misaki is attacked and raped by two thugs. She quickly begins to offer her body for free. Her life and the life of Akkio, a younger sister of Misaki will be connected with the perverse activities of the cab driver.

In Wife Collector, for example, the central victim (for there are many) doesn't cut off her attacker's todger with a pair of scissors; instead, she finds the whole experience rather exciting and deliberately sets out to receive more of the same from total strangers. Only too happy to oblige is a sleazy taxi driver, who has thus far been using his cab to trap young women, before taking them home and making them unwilling stars of his unique home video collection; when he spies the sexy and only-too-happy-to-be-abused woman being amateurishly groped by three dock workers, he steps in and gives her precisely what she is after. As if all of this wasn't offensive enough, the film also sees the woman's younger sister, who has been intrigued by her sibling's 'ordeal', seeking some of the same!!!