Adelaide gets slapped in the tub

The couple settles in the room that the Baroness gave them. Adelaide takes a bath in the tub and is touched and slapped on her butt by the invisible Sir Archibald a few times. She thinks it’s her husband who’s doing it and scolds him. 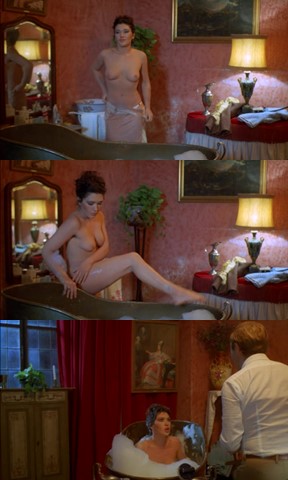 In order to have food for their guests, Sir Archibald and his servant Angus (also a ghost) steal food from Terence’s inn. In order to do that, he distracts Terence and the inn’s male clients by ripping the clothes of Terence’s busty wife (Marianne) in front of all of them. 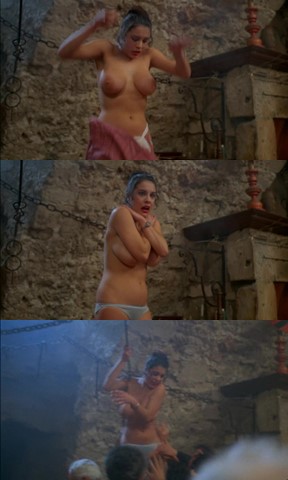 Adelaide gets fingered in the dining table

The couple dines with the Baroness. Sir Archibald goes under the table and starts pleasuring Adelaide between her thighs. Adelaide thinks it’s her husband again and wonders how he can do it when his two hands are visible to her. She thinks maybe he’s using his feet. Adelaide starts moaning and reaches orgasm while trying to act normal in front of her husband and the Baroness.

After dinner, the couple goes inside their room to consummate their marriage. But it’s Sir Archibald who does the honors, replacing Camillo who passed out due to the sleeping potion. He fucks Adelaide while Camillo is passed out on the floor. Adelaide thinks that the sex is great but also thinks that it’s her husband that she made love to.

In the morning, Camillo vaguely remembers what happened last night. He kind of remembers that Sir Archibald introduces himself to him, but Adelaide tells him that it’s all a dream. She also tells him how great in bed he is, but he doesn’t remember fucking her, so he starts suspecting that something is up.

Terence’s wife and Camillo are caught in a compromising position

Sir Archibald torments Camillo and makes his motorcycle crash. Bruised and disheveled, Camillo goes to Terence’s inn to ask for help (with his motorcycle accident and also to fix his car whose tires Sir Archibald punctured). Terence is not currently there so she is received by Marianne. She brings him inside their bedroom and tells him to take off his ripped clothes inside the bathroom. She will let him borrow her husband’s clothes for now.

Sir Archibald has a mischievous plan for the two, however. He throws an insect inside Marianne’s blouse, which makes her strip down to her panties in trying to lose the bug off. Terence comes home and sees his wife and Camillo naked inside their bedroom. He thinks that they just finished fucking and he starts to sharpen his razor, intending to castrate Camillo. Camillo manages to escape through the window. 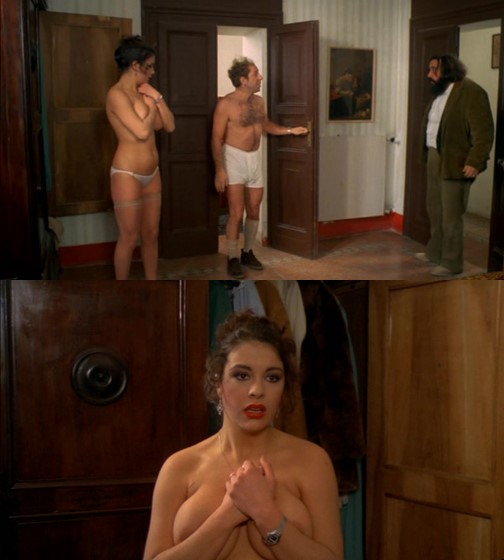 Camillo and Adelaide are about to fuck again, but Sir Archibald disposes Camillo by throwing him down a hole inside the cabinet and fucks Adelaide in his place for the second time. Adelaide is enjoying the sex but Sir Archibald suddenly disappears in the middle of it, plus she notices that he has a beard while her husband doesn’t have it.

Sir Archibald appears to Adelaide and apologizes to her. She makes a deal with him. She says that she will have sex with him one last time if he can assure of Camillo’s safety (who is still missing at this point).

Sir Archibald goes out of the room to make sure that Camillo’s all right and when he comes back, she sees Adelaide in a seductive pose on the bed, flirtatiously smiling and eagerly waiting for him. It seems that she’s going to be happy fulfilling her end of the deal. Well, Sir Archibald did give her great pleasure after all so she’s looking forward to it.

If Adelaide’s previous sex sessions with Sir Archibald weren’t cheating because she thought that she was with her husband, well this time she definitely knows who she is going to fuck. She clearly intends to cheat. Even if she’s doing it for her husband’s safety, she would have offered something else other than sex if she doesn’t really want the Baron’s dick inside her again.

Unfortunately, though, Sir Archibald gets knocked out due to drinking a sleeping potion (tricked by his vengeful servant), so he isn’t able to fuck Camillo’s hot wife one last time.

Camillo gets the last laugh

This is one hot Italian 80’s sex comedy. Like Sir Archibald, I wish I have ghost abilities too so that I can easily have my way with other men’s hot wives.