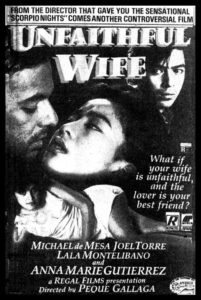 The film concerns the attempts of Fidel to resume a normal life after the devastation wrought by his wife’s death. He returns to his old friend Crispin and wife Irene. A tentative effort with another woman fails, and Fidel finds himself in Irene’s arms. That same evening a young girl is brutally raped and murdered. Fidel, unable to account for his whereabouts, is named the principal suspect, which later leads to his imprisonment. Crispin, meanwhile, learns of Irene’s infidelity; his friendship is put to the test when Fidel escapes, gets wounded, and asks Crispin to kill him and put him out of misery.

Details for the movie Unfaithful Wife (1986)

Fidel returns to his hometown and back into the life of his college best friend, Crispin, who is now married to Irene (Anna Marie Gutierrez, who also plays the cheating wife in Scorpio Nights). Irene sees Fidel crying while talking to Crispin privately. He is still depressed about his ex-wife who died some time ago.

Irene hooks Fidel up with her friend Rosa

Irene feels the need to help Fidel forget his ex-wife. Uh-oh. By that, you don’t mean fucking him, Irene, do you? Well, of course not, at least not at first. Irene introduces Fidel to her best friend, Rosa, so that he can have a girl that will help him forget.

Things go okay between Rosa and Fidel at first. But Rosa is a bit old-fashioned. So when Fidel tries to initiate sex with her, she refuses. It ends up with Fidel hitting and attempting to rape her.

Rosa goes to Irene to tell her what Fidel did. Irene confronts and slaps Fidel in front of her husband and insults him.

Crispin has to go somewhere for an errand and won’t be back for the night. Before leaving, he is able to convince Irene to apologize to Fidel and to understand him better. After he leaves, Irene sends a message to Fidel, telling him to come to their home/restaurant so that they can talk and, ahem, “understand each other better”. (At this point, though, Irene has no intention of seducing Fidel, I’m just putting some malice into it).

Fidel and Irene get to know each other better

Fidel arrives at Irene and Crispin’s home a little late into the night. They talk. Things get heated up when the topic of Fidel’s dead wife is brought up. Irene calls Fidel a coward because he can’t let go of the memories of his wife. Fidel gets insulted and starts sobbing. Irene feels guilty for making him cry, so she starts hugging him from behind. She turns his body towards her and kisses him. Fidel is taken aback, conflicted because, well, this is his best friend’s wife.

Irene walks to the flight of stairs leading to the couple’s bedroom. Then, she turns her head towards Fidel and gives him a seductive look that’s practically telling him, “If you want to fuck me, all you need to do is to follow me up these stairs and into the bedroom.”

Fidel pauses, then he looks towards Irene’s direction and decides that yes, he wants to fuck his best friend’s wife. He comes towards her and they kiss. They go upstairs and have sex. I like their sex scene because it has tons of kissing and foreplay, indicating to us that Fidel savored his best friend’s wife in an unhurried way, because hey, she is his for the entire night on account of her husband being out of town, so why rush?

Interspersed between their sex scenes are scenes of a girl named Choleng being raped and murdered that night. Fidel gets accused of rape and murder

Choleng’s body is found and eventually, Fidel gets the blame and he gets jailed as a suspect. Irene cannot vouch for him because she just can’t tell everybody, including her husband, that Fidel was fucking her during the night of the murder.

Eventually, Irene confesses to Crispin that she and Fidel had sex that night. Crispin visits Fidel in his jail cell and beats him up. But eventually, he forgives his friend. Meanwhile, Irene visits Fidel too and tells him that she is pregnant and that he is most likely the father.

Fidel tries to escape and dies. In the end scene, Irene has a baby bump while having a picnic with Crispin and Fidel’s son (whom it seems they have adopted). Crispin looks happy. I’m not sure if he knows that it is Fidel’s child that Irene is carrying inside her womb.

The wife has pretty decent sex scenes and she does show us her goods, but most of the raunchy, porn-like scenes are provided by Choleng (Lala Montelibano). In fact, her sexy scenes seem to be out of place and irrelevant to the plot of the movie. I guess they’re there to satisfy a certain crowd.