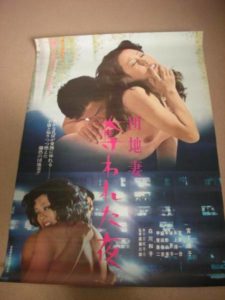 Etsuo Egami's wife, Michiko, wishes of acquiring a car because a lot of their neighbors are doing so. One night, she comes to the shop of Hatanaka, a car salesman, to look at the cars on display. Hatanaka allows her to test drive the car that she likes. When she drives it, she accidentally hits an old woman. She comes out of the car and sees the old woman lying motionless on the road. She panics and drives away, leaving the old woman behind. The next day, Hatanaka, who knows what happened, tells her to come to his shop so that they can talk about it. He takes advantage of Michiko's fear and confusion and he drives her to a motel and drugs her. He starts making love to her and succeeds because of her drug-induced state. Since then, Michiko's fate lies in the hands of Hatanaka and his accomplice, Takagi, who use the hit-and-run incident to blackmail her. Not only do they take advantage of her sexually, they also ask money from her. Eventually, Michiko starts getting suspicious and she goes to the police to ask about the accident. It turns out that the old woman that she hit with the car is alive. Relieved, Michiko does all in her power to make sure that Hatanaka and Takagi goes to jail. (note: source is Google Translate so might not be accurate)