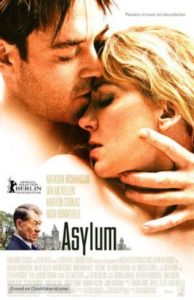 In the 1950s, the psychiatrist Max Raphael is hired to work as superintendent of an asylum in the outskirts of London, and he moves with his wife Stella Raphael and their son Charlie. Stella has a passionless marriage and is ignored by Max. Her boredom changes when her son befriends the handsome inmate Edgar Stark, an sculptor that in a crisis of jealousy had killed and disfigured his wife, and that is treated by Dr. Peter Cleave, an ambitious psychiatrist that aspired Max's position. During the afternoons, Stella has a hot adulterous affair with Edgar until the day he escapes and their affair is discovered. Stella has to take a decision between her family and her wild passion for Edgar.