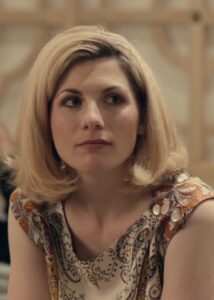 In the future, thanks to the Grain, a chip which can be implanted on a hard drive in the brain, every single action that a person makes is recorded and may be played back. Liam, a lawyer, married with a child, suspects that his wife Fi is having a fling with the brash Jonas, whom they meet at a dinner party. 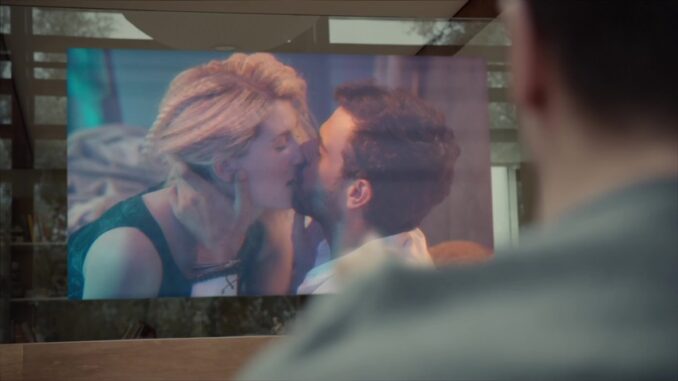 During a dinner party, Liam notices that his wife Ffion is not acting normally around Jonas. Later back at home, Ffion is forced to admit to him that she and Jonas were together before. She says it was for a month but Liam shows him his memory where she said that the guy was just a fling in Marrakech and that they only had a one-week affair.

In the morning, Liam displays his memories of last night's dinner party and shows them to Ffion. In it, a memory of one of Ffion's friends is also being played on a big screen. Ffion and her friends were at a bar. In the foreground were Ffion's friends dancing, and in the background, she and Jonas were seen making out on the couch. Now this memory was made before Liam and Ffion were together, but it shows that Ffion was lying when she said that she and Jonas were only together for a month and so she is forced to admit that they've been actually together for 6 months.

Liam goes to Jonas' place, starts a physical altercation with him and demands that he erases memories of his wife from his chip. Liam wants him to because he is bothered when Jonas was telling last night at the dinner party that he plays and masturbates to memories of his sexual encounters with a woman in his past, and Liam is sure that it was Ffion whom he's referring to.

Before Liam makes Jonas delete those memories, he makes him display them as screenshots on the large tv screen first, and that's when he saw that one of the screenshots from Jonas' memories is that of his wife in their bedroom. That means Jonas had been at their house and had fucked his wife on his own bed!

Liam comes home and confronts his wife who denies that he had sex with Jonas in their own bedroom but is forced to admit it when Liam shows him Jonas' memory. Liam demands that Ffion show him her own memory of that day. After trying and failing to delete it in front of Liam, Ffion finally shows it on the big tv screen. We see Jonas on the screen in the couple's bedroom taking his clothes off and we hear Ffion's flirtatious laughter in the background. Unfortunately, we don't get to see their actual lovemaking but we do hear their moans as the camera focuses on Liam while he views and processes moving images of his wife fucking another man.

The memory happened 18 months ago. The couple has a baby, so Liam also asks Ffion if Jonas wore a condom that day because if not, that would mean that there's a chance that Jonas could be the father of her baby.

Ffion is a top-ace cheating, lying, bitch who denied each and every accusation that her husband hurled at her and only admitted them, one by one at that, when she was presented with pieces of evidence. The whore even lied that she already deleted her memory of her infidelity and then went on to actually try and delete it in front of her husband.